"Use Your PFD Wisely" Campaign

Alaska 529 and the Alaska Boating Safety Program have announced that they will be working together to help keep Alaska youth safe, when on or near Alaska’s ocean and waterways. 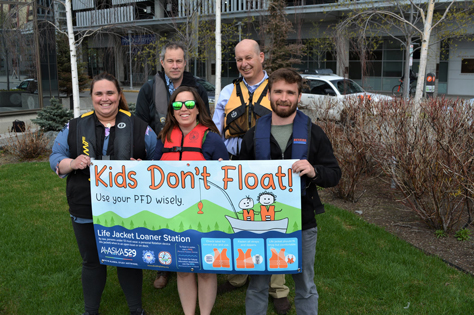 Alaska 529 is stepping up to sponsor more than 6,200 new personal floatation devices (PFDs) at the 680 loaner stations in Alaska.

Olivia Drown, Kids Don’t Float Instructor, said, “The Kids Don’t Float Loaner Board Program was developed to help address Alaska’s high incidence of childhood drowning. Personal floatation devices have historically been thought of as a substitute for swimming ability, but with an increased understanding of the dangerous effects of cold water immersion, many Alaska boaters are now realizing the importance of always wearing a life jacket when in an open boat or on deck, even for good swimmers. The loaner boards display PFDs that can be borrowed at no cost. In a collaboration between multiple state and federal agencies, as well as local grassroots sponsors, the program now has hundreds of loaner boards across the state. The program is known to have saved at least 36 lives so far.”

Lael Oldmixon, Alaska 529’s Executive Director, says she’s excited about the partnership. “The Alaska Permanent Fund Dividend is an important source of funds for those saving in Alaska 529. Each year we tell people to use their PFD wisely. Well, the exact same message can apply to Personal Floatation Devices, Alaskans should always use them wisely when around water! We’re delighted to bring two important PFD programs to Alaska youth.” The new PFDs and loaner board sign will both display the “Use your PFD wisely” message.

As part of the agreement, Alaska Boating Safety will begin updating the signage at its loaner boards stations. The refreshed signs will retain many of the familiar elements of the signs but will include Alaska 529’s message and logo.

By clicking on any third-party hyperlink, you will leave the Alaska 529 site. Alaska 529 has not been involved in the preparation of the content from third-party providers and does not explicitly or implicitly endorse or approve such content. In addition, the plan does not alter or change such content as it is provided. The source of all content is clearly and prominently identified.

If you are not an Alaska resident, you should compare this Plan with any 529 plan offered by your home state or your beneficiary’s home state and consider, before investing, any state tax or other state benefits, such as financial aid, scholarship funds, and protection from creditors that are only available for investments in the home state’s plan. Please read and/or download the Plan Disclosure Document, which includes investment objectives, risks, fees, charges and expenses, and other information that you should read and consider carefully before investing, or call 1-866-277-1005 to request a paper copy. T. Rowe Price Investment Services, Inc., Distributor/Underwriter.