Golden Days, held each year in July, is one of Fairbanks’ favorite traditions. The community gets together to celebrate the city’s founding event – Felix Pedro’s discovery of gold in the area. The Fairbanks Chamber of Commerce hosts most of the events, including a rubber duckie race, a street fair, and the biggest parade in Alaska. 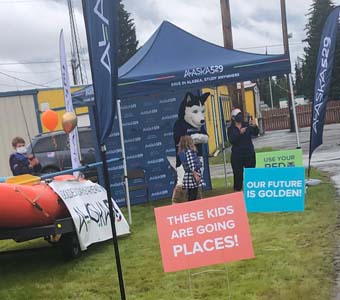 The Chamber came up with the idea of a reverse parade to allow for proper social distancing and to ensure the safety of participants and spectators. The parade was held at the Tanana Valley Fairground, and the “floats” were stationary, while the spectators drove through the fairgrounds to admire the displays and greet the participants.

“We have never participated in a Golden Days Parade before but decided to jump on board this year because so many of our usual events got canceled,” said Lael Oldmixon, Executive Director of Alaska 529. “We had a lot of fun and were very excited when the judges brought us the Best Non-Commercial Float banner.”

Alaska 529’s theme was “These Kids are Going Places,” in keeping with our support for access to educational opportunities and of initiatives designed to help children reach their full potential.

By clicking on any third-party hyperlink, you will leave the Alaska 529 site. Alaska 529 has not been involved in the preparation of the content from third-party providers and does not explicitly or implicitly endorse or approve such content. In addition, the plan does not alter or change such content as it is provided. The source of all content is clearly and prominently identified.

If you are not an Alaska resident, you should compare this Plan with any 529 plan offered by your home state or your beneficiary’s home state and consider, before investing, any state tax or other state benefits, such as financial aid, scholarship funds, and protection from creditors that are only available for investments in the home state’s plan. Please read and/or download the Plan Disclosure Document, which includes investment objectives, risks, fees, charges and expenses, and other information that you should read and consider carefully before investing, or call 1-866-277-1005 to request a paper copy. T. Rowe Price Investment Services, Inc., Distributor/Underwriter.